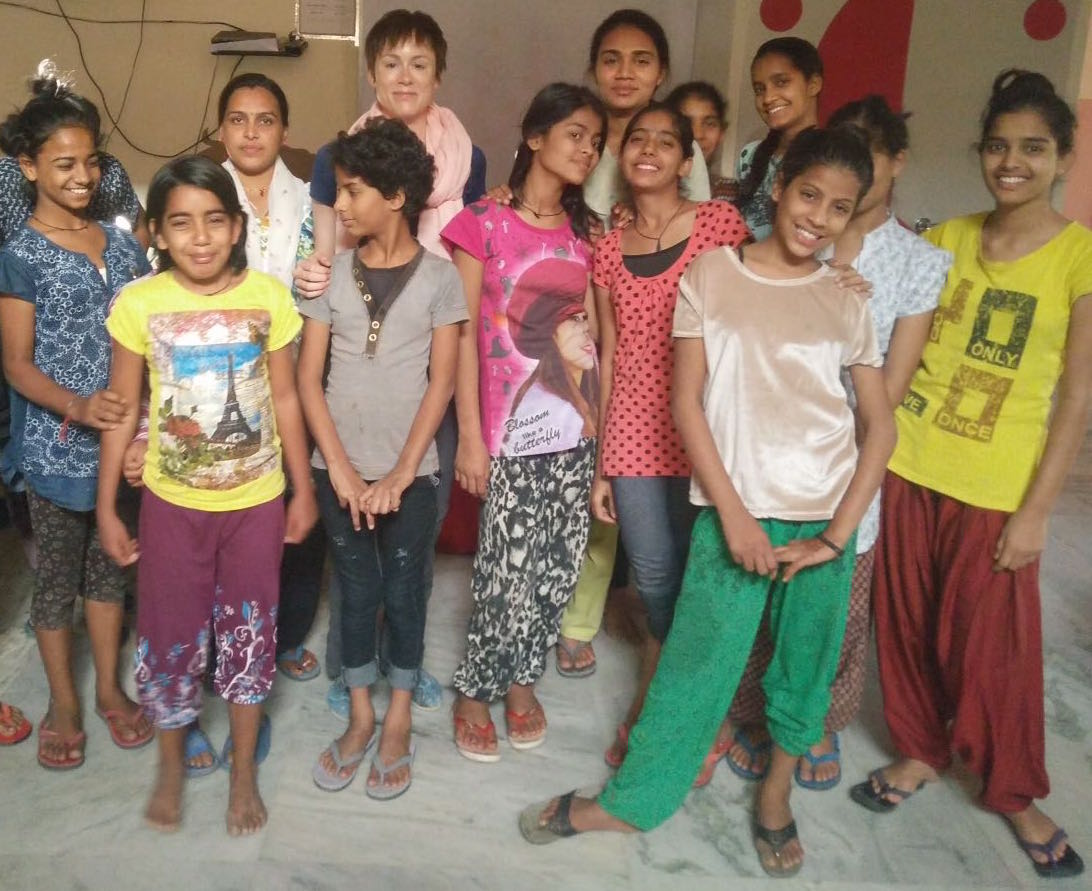 Posted at 13:38h in Uncategorized by AATC Faith
0 Likes

A small but significant proportion of Indians are HIV positive, including a number of children. Rebecca Jones visits Faith, an NGO in Jaipur that cares for children living with the disease.

I visited Faith Sansthan Aalingan Care Home in Jaipur, India on 11 November 2016 under the care and supervision of Dr. Narendra Jangid. Faith is a non governmental organisation (NGO) affiliated with global NGO arms around the child that houses and cares for children that are largely HIV positive. On our journey through the dusty and chaotic roads of the Rajasthani capital toward the centre I learned from Narendra that HIV is a proportionally small but significant problem in India, with an estimated 2.1 million Indians currently suffering with HIV. Like so much of the developing world it largely affects those from poorer communities and Rajasthan is particularly vulnerable due to the area being a hub for immigrants from other affected areas, many of whom find themselves working in the sex trade.

Most of the children that come to Faith are orphans whose parents have sadly died from the disease and whose relatives are unable, or in some cases unwilling, to care for them. Currently there are 48 children under Faith’s care; 36 boys and 12 girls. As I learned later this disproportion may be explained by sex selection, skewed towards boys, which has been practiced (though illegal) in India for some years.

My first stop on a seasonally hot and dry November day was the boys home; as Narendra and I walked through the gates a gaggle of young boys ranging from age 6 to 18 came to greet us, offering Narendra the customary foot and chest touch that younger Indian’s extend to their elders while a firm English handshake was extended to me. Narendra introduced me to some of the staff that care for the children; numbering 20 these include caretakers, cooks and a doctor – all of whom dedicate their lives to helping these children.

Walking into the boys house I noted immediately it’s bright and airy feel – a welcome repose from the chaos of the streets of Jaipur’s city centre. The house is, in-fact, set inside a gated and guarded compound reserved for Indian expats returning from living abroad – a government initiative designed to encourage nationals to return to their homeland, and bring their wealth with them. Inside the house the boys were assembled in a semi circle around me and asked to come up and introduce themselves, including their names, ages and hobbies. Perhaps unsurprisingly one of the most popular pastimes was cricket, as well the Indian national game kabbadi, both of which I had to quietly admit my complete ignorance of. The boys ranged from longtime residents of 5 years or more to a new boy recently transferred from Delhi – a wry, challenging smile and excellent command of English indicated a charming troublemaker. Most of the boys attend local schools however Narendra explained that there had been an outbreak of dengue fever and due to their lowered immune systems it had been deemed necessary to keep them at the centre. The boys gave me a tour of their home, including their small temple and outdoor space dedicated to the practice of yoga and meditation. As Narendra explained to me this is a key component of the boys’ programmes – important for their mental and spiritual health and one sadly lacking in our western approach to caring for such children.

After the tour we headed to the girls home. This is where the administrative office is housed and where Narendra ran me through more of the wider issues of HIV as well as the process by which the children come to Faith. Typically these children will be visit local Integrated Counselling Therapy Centre’s, then if diagnosed referred to Anti Retroviral Therapy Centres, where they are then treated and monitored. Should they be deemed at risk state social workers will then assess their situations and if necessary ask NGO’s like Faith to house them. At Faith each child is prescribed a dedicated care program that covers their medical, educational and social needs. They are then monitored carefully throughout their time at Faith. The centre also maintains regular contact with the children’s extended family by way of monthly visits of relatives to the centre while some of the children will also visit family on special holidays. In this way the organisers attempt to educate the family about HIV, reduce stigma and hopefully reintegrate the children after they reach 18. As in so much of the world, HIV carries with it fear and prejudice in India where often the child is judged by the sins of the parent and fear of infection prevents normal familial and social contact. As Narendra outlined, the solution is the same here as everywhere: education – and this is a key goal for the centre.

After our chat I met the girls: a vibrant and excitable bunch who were also encouraged to introduce themselves. The eldest, Aisha*, is 18 and had been recently accepted by the local college due to her excellent grades. Her formidable command of English meant she was chosen to show me around; like the boys house the girls have a number of rooms which they share, typically organised by age group, as well as an outdoor space for yoga and mediation and a common area where they eat and play. Aisha also showed me the isolation room where girls suffering from infections are kept – again to protect the other children due to their lowered immune systems. After the tour we had lunch; a typical but delicious mix of daal, aloo, rice and chapatti. Both Natendra and Smriti, the centre’s other key organiser who had come to the centre to greet me, apologised if it was too spicy, however I reassured them that as an East Londoner I was raised on curry.

Following lunch, Baljit*, who had been  itching to practice her henna skills on me since I walked through the door got to work on my right hand, drawing an intricate pattern on my palm that she had learned and memorised from a magazine. Two of the younger girls then treated me to a dance rendition taught to them by a renowned Mumbai dance troop that recently visited the centre. In perfect unison the girls performed to a Bollywood hit, with young Mena* – the centre’s youngest and naughtiest inhabitant scrabbling to keep up at the fringes. Despite calls for me to hit the dance floor I avoided embarrassing myself and the girls by my two left feet by complaining of a twisted ankle – not entirely untrue.

Over a final cup of customary chai tea – a sweet, milky concoction that is perhaps the only lasting indication of the British Raj – I observed to Narendra that the children’s spirits seemed very high. He explained to me that the centre’s focus was on providing the children with love. While formal professional counselling is important, he and the staff believe that a loving home is the most important element of the children’s care. This extends to their medical treatment; he explained that the children receive their anti retroviral medication from the house doctor twice a day but beyond this the staff attempt to help the children to lead as normal lives as possible with not much discussion of HIV. As an untrained observer, I cannot say more about this approach other than the result seems to be seemingly spirited and engaged children, not unlike the many I have worked with in schools in the UK.

Faith, like Volunteer Invest’s sister organisation Bobbi Bear in South Africa, dares to venture where many state systems and other NGO’s dare not. The centre’s dedicated staff care for and support children that are left without the help and support they deserve, often due to a disease so poorly understood throughout the world. Understanding these issues is a vital part of combatting HIV and AIDS, as is engaging with those who live with the disease, which is so easily managed with the right healthcare. I learnt a huge amount during my brief visit to Faith and I will remain forever grateful.