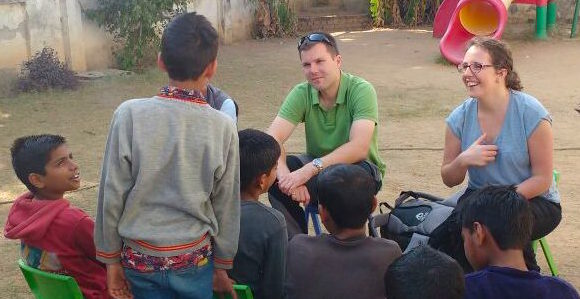 Posted at 13:29h in Uncategorized by AATC Faith
0 Likes

Whilst travelling around Rajesthan in December 2016 we were lucky enough to be given the opportunity to visit Faith Orphanage in Jaipur.

This was a fantastic experience, and while neither of us were sure of what to expect, we were both completely bowled over by the happiness, enthusiasm and infectious energy of all of the children. It was also nice to see that despite being on the other side of the world to home, that girls are still far more organised and tidy than boys!

We were collected from our homestay in Jaipur by Naren, the manager of the orphanages. During the characteristically traffic laden journey out of Jaipur he explained in the history of the Faith orphanage, the involvement of Arms Around the Child and how the orphanage was run. We were delighted to learn that not only were the children all able to attend school each day, but that the tide of stigma against AIDS in India was slowly turning.

We initially visited the boys’ house, finding that many of the children were at school sitting important exams. Those who remained behind were meant to be revising, but we proved a welcome distraction from all that work! The boys were fantastic, and delighted in thoroughly beating us at several local games. We all introduced ourselves and learned that besides their academic inspirations several of the boys wished to be become cricket superstars (we weren’t really in a place to argue as India had given England a thorough schooling in Test Cricket the previous day!)

We then took a short journey around the corner the girls’ house. Here was positively tranquil compared to the sporting chaos of the boys. The girls delighted in telling us their career aspirations and even showed us some of their artwork. It was heart-warming to see that despite all of the adversity they had faced the girls refused to lower their sights or lose their aspirations. We were also lucky enough to enjoy lunch with the girls, who were at pains to ensure we had enough food!

AIDS is a disease but is by no means a death sentence, but the stigma it attracts in India is terrible. It is hoped that continued education of the population will gradually erode this, but the right now it remains. The work undertaken at Faith was a true inspiration, giving every child in the orphanage the chance at a healthier and brighter future. It was abundantly clear that some of these children had lost everything, but had never lost their desire for life, or their self-respect. While Faith is able to re-introduce only some of these children to their families is wonderful that they are all given the opportunity at growing up in a loving and nurturing environment. They may not all become the next Sachin Tendulkar but that surely won’t stop them trying!